The Inside Track — Immigrant CEOs of the Fortune 500

When the Trump administration announced it was pushing pause on all new immigration visas through the end of 2020, it sparked an immediate outcry from tech industry leaders. Alphabet CEO Sundar Pichai, himself an immigrant from India, took to Twitter to express his disappointment. “Immigration has contributed immensely to America’s economic success, making it a global leader in tech, and also Google the company it is today,” he wrote. “We’ll continue to stand with immigrants and work to expand opportunity for all.”

Apple CEO Tim Cook issued a tweet of his own. “Like Apple, this nation of immigrants has always found strength in our diversity, and hope in the enduring promise of the American Dream. There is no new prosperity without both. Deeply disappointed by this proclamation.”

And Microsoft President Brad Smith put the ban in the context of a pandemic-induced economic crisis. “Now is not the time to cut our nation off from the world’s talent or create uncertainty and anxiety,” he said. “Immigrants play a vital role at our company and support our country’s critical infrastructure. They are contributing to this country at a time when we need them most.”

The administration’s move was touted as a way to put more Americans to work: By eliminating work visas — the H-1B, H-2B, H-4, J-1, and L-1 visas primarily used by professionals — companies would have no choice but to hire workers born in the U.S. But that ignores some important data about the impact immigrants have on our economy.

A 2019 report from research organization New American Economy shows that 45% of Fortune 500 companies were founded by immigrants or their children, a cohort that includes Amazon, Apple, Tesla and Alphabet. Those companies generated $6.1 trillion in revenue in 2018, which is more than the GDPs of many developed nations, including Japan, Germany and the UK.

Those companies are also a key source of jobs. In total, they employ over 13.5 million people, and each company has an average of 60,629 workers, which is 10.7% more than the average number of workers at firms not founded by immigrants or their children.

Using our BI PRO platform, we took a look at the countries of origin for CEOs across the Fortune 500 and generated some interesting insights. (You can download the full list by clicking the button below.) 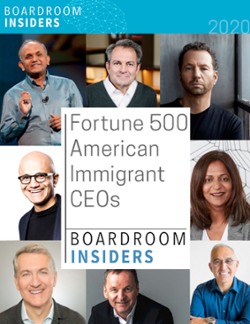 First, roughly 56 Fortune 500 CEOs (about 11%) are immigrants, according to our analysis. They come from 28 different countries. India has given us the most chief executives — a total of 10 in the current class of F500 companies — followed not-so-closely by Italy (4), the UK (3), Taiwan (3), Argentina (3) and Brazil (3). When it comes to industry, 41% of immigrant CEOs lead manufacturing companies, 18% lead telecom/IT companies, 9% are in retail, and 5% work in financial services.

Then, we took a look at how those CEOs came to the U.S. — a critical factor in the conversation about visas and perpetuating the pipeline of immigrant CEOs. Around 16% came here as children, and 20% came here to go to university (mostly Stanford, Harvard and the University of Pennsylvania). But a whopping 59% worked their way up through the international divisions of U.S.-based companies in the F500 — GE, Procter & Gamble, HP, Johnson & Johnson — until they earned a spot at the top of the C-suite.

It’s also worth noting that this group includes some of the most high-profile chief executives in the F500. Safra Catz, the CEO of Oracle, hails from Israel. Microsoft CEO Satya Nadella, Adobe CEO Shantanu Narayen and IBM CEO Arvind Krisha are all from India. Uber CEO Dara Khosrowshahi is from Iran. And Tesla CEO Elon Musk is originally from South Africa.

They, along with their American-born counterparts across the Fortune 500, are driven to succeed. It’s what has gotten them this far in their careers, and it’s what will spur them to find solutions to problems that limit the growth of the businesses they run — like lack of access to talent. That was beginning to take shape well before the pandemic. In 2018, for instance, when the U.S. government began making it more difficult for companies to hire talent from other countries, Uber announced it was opening a new research facility in Toronto, a project that promised to bring hundreds of jobs to Canada instead of the U.S.. In light of recent developments, we can only assume other executives will consider similar shifts to preserve their access to talent, if and when the time comes.

We all need to be aware of what’s changing in the C-suite. Marketers should be focused on bringing the latest information to their account teams as it develops. Given that we employ a small army of really smart people to read and parse corporate earnings call transcripts, CXO interviews and emerging C-suite trends all day long, we can help by feeding you the latest.

What do you do with this information? Do what you have always done — align and support. Here are the four questions you should try to answer about all of your top accounts:

Now we want to hear from you. What’s keeping you and your team up at night, and how can Boardroom Insiders help? Let us know at info@boardroominsiders.com, with the subject line “INSIDE TRACK.”