How Salesforce Is Winning Nine-Figure Deals

On a February 2016 earnings call, Salesforce execs crowed about having “the absolute best quarter we have ever had,” capping off “a breakthrough year.” Management attributed this “amazing” success" to "an all-time high in the number of large transactions” including a net-new nine-figure deal, a nine-figure renewal and more than 600, seven-figure plus transactions.

As Vice Chairman, President and COO Keith Block put it, “no one in enterprise software is developing more strategic relationships right now than Salesforce.”

Salesforce Founder, Chairman and CEO Marc Benioff went on to share the company’s secret sauce, a simple and straightforward formula that he says differentiates his company from his competitors, and, according to Business Insider, is expanding Salesforce’s market share “at the expense of legacy brands like Oracle and SAP.”

He sells directly to CEOs.

"When I look at the largest transactions ... every transaction was done with the CEO," Benioff said. "I think it's really unusual, and that's why we're really selling more enterprise software than Oracle or SAP."

At Boardroom Insiders, we’ve been watching Benioff for years. In fact, we wrote about him back in 2011 on this very topic. In his 2010 book, Behind the Cloud, he emphasized the importance of learning about your potential customer by using your network and connecting the dots…all the way to C-Suite.

Over the years Benioff and his team have found that CEOs are taking more active roles as the “de facto chief digital officers,” he said. In other words, Salesforce is selling into the CEO as opposed to other C-Level positions because they have a product that can solve bigger, more strategic problems that CEOs care deeply about.

"These are CEO-level conversations, we're in the board room, presenting to the board,” Salesforce COO Keith Block said on Salesforce’s recent earnings call. "In the last three weeks, I've had more conversations with CEOs around transformation than in my entire career over 30 years."

Given that Benioff’s strategy is to go directly after the CEO, he needs to be directly accessible for these meetings—this is no small feat for a busy CEO. But the payoff is worth it: $1.81 billion in quarterly sales, and more than $11 billion in deferred revenue — contracts that will eventually get recorded in the books in the future.

Of course, Benioff is the ultimate sales guy. Not every company is led by someone as committed to—and or as comfortable with—driving deals with CEO peers. This could prove to be a formidable obstacle for companies that are trying to get a C-Level engagement strategy off the ground.

So if having your own C-Suite ambassador is an absolute necessity for C-Level selling, what do you do if you don’t have a Benioff in your corner?

First of all, your sales management needs to have an honest conversation with your company’s C-Suite to ensure executive support this kind of an effort. When they ask why they should sign up for this, point them to this article.

Think about the skills, strengths and passions of your executive team. Maybe your CEO isn’t the right person to support a C-Level engagement effort. But chances are someone on the team—your CIO, CTO, COO, or CMO—is willing and up to the task. Who’s it going to be?

Secondly, you need an infrastructure equipped to arm senior management with the information they need to have the right business conversations with fellow C-Level executives. It was said, for example, that when former Cisco CEO John Chambers had a meeting with a C-Suite customer, he wanted to know everything about them before going into the meeting, “down to the color of socks they were wearing.” While this is of course an exaggeration, the point was that Chambers had a team of people who uncovered and fed him the exact information he needed going into these customer meetings.

We’ve talked to hundreds of companies that are prioritizing C-suite selling. Not all are successful.  But for those that are, there are two critical success factors:

1.    Commitment from your own executive team

2.    The right intelligence on your customers and their leadership

What do you think? Is there any other company you believe is effectively selling into the C-Suite? If so, we’d love to hear about it. 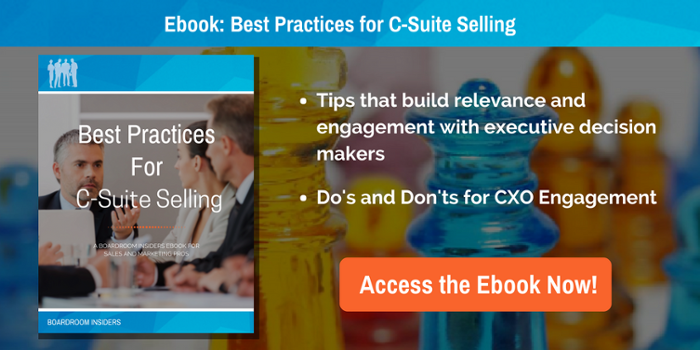