Salesforce is a company I follow very closely. Given their phenomenal growth and the fact they are a longtime customer of ours, I read their quarterly earnings call transcripts regularly.

Success for Salesforce in 2016

Back in 2016, Salesforce reported “an all-time high in the number of large transactions,” including a net-new nine-figure deal, a nine-figure renewal, and more than 600 (600!) seven-figure plus transactions. When analysts asked how the company had been able to close such a mind-blowing volume of mega-deals, CEO Marc Benioff and President and COO Keith Block shared the secret to their success: they sell directly to CEOs.

"When I look at the largest transactions ... every transaction was done with the CEO," said Benioff at the time. "I think it's really unusual, and that's why we're really selling more enterprise software than Oracle or SAP."

Over the years, Salesforce has developed and acquired a large suite of products. Like many SaaS companies, they have taken a “land and expand” approach, where they aim to sell customers much bigger enterprise licensing agreements (ELAs) across multiple products. In order to accomplish this, they have to sell business outcomes--not products—and these bigger, more strategic deals often force C-level conversations. Benioff knows this (he wrote about it way back in 2010 in his book Behind the Cloud.)

Continued Success for Salesforce in 2017

I recently checked in again on Salesforce, to see what its leaders had to say on their November 2017 earnings call—particularly to see if they offered an update on their C-Suite selling strategy.

Salesforce is still growing like crazy; revenues for the quarter were up 25 percent. And, Benioff and block are still crediting the company's success— in large part — to its C-Suite selling strategy.

“What we've started to see over the last 24 months is how important it is for CEO engagement,” Block told CNBC in November 2017. “And we have a steady drumbeat of CEOs who are coming to us to talk about: What does digital transformation mean in my industry? What is your point of view? What is disruption? How can I leverage all these amazing technologies of cloud, mobile, social, data science, artificial intelligence in changing our business model? And it is a regular dialogue with the CEO. I don't believe that is happening in Redmond [where Microsoft is based] or Redwood Shores [where Oracle is based] on a regular basis, or in Waldorf [where SAP is based], but we are having those conversations.”

Block has become an active ambassador to the global CEO community. Earlier in the fall he was in Europe, where he says he met with over 50 CEOs. He is also leading  Salesforce’s charge to go into customer boardrooms alongside its system integrator partners; companies like Accenture, for example, who—due to the transformational nature of their consulting engagements--have long sold into the C-Suite.

Salesforce is also putting a lot of investment behind its effort to be a bona fide digital transformation partner. It launched a robust customer collaboration program called Ignite, that helps customers reimagine how digital transformation could spark new revenue streams, improve operational efficiency, or transform corporate culture. At the end of the program, Salesforce then delivers a draft prototype to the customer for that transformation—whether it’s a mobile app or digital service that happens to use Salesforce software.

Salesforce claims that Ignite has moved more than 250 customers toward what the company calls the “digital precipice” in less than two years, driving more blockbuster deals and record revenue. The Ignite program is brilliant in that it not only enables visionary CEOs to co-create their future—with Salesforce—it also gives Salesforce invaluable insights into customers, leading to more effective collaboration and deeper relationships.

What Benioff and Block understand is that all C-suite executives are intently focused on the increasingly critical role technology plays in the business. They have to be to if they want their companies to survive. Digitalization after all, is no longer just about back-office issues, but the totality of the business. The entire C-Suite is looking for help and guidance, and Salesforce’s top brass is willing and ready to provide it. That is why Salesforce is winning more mega-deals.

Consider this: According to analyst and consultant, Michael R. Levy, “Over the past four years, Salesforce has more than doubled the number of million-dollar deals to 1,600 and quadrupled the number of $5 million deals to 260.  At the upper end of the revenue spectrum, Salesforce has one hundred customers with annual deals of $10 million and 24 in excess of $20 million.”

Salesforce’s sustained success with the C-suite is enviable—but hard to duplicate. It takes committed leadership to mandate and invest in C-Level engagement and turn it into an ongoing sales strategy. Not all leaders are like Benioff and Block, who can enter a meeting with their counterparts and their boards with the confidence and aptitude for conversations that lead with vision but incorporate practical technical and business recommendations. They’re the ultimate sales guys.

But even if you don’t have a Benioff/Block duo at the helm, you can still design a successful C-Level engagement strategy of your own. You’ll need four things to succeed:

Salesforce’s big bet on C-Suite selling can either intimidate other tech vendors or be a valuable proof point of the ROI of such an approach—as well as a source of inspiration. Their success inspires us to keep doing what we do, which is support them and other organizations with critical insight into what C-Suite customers are saying and doing—and what problems they need help solving. Isn’t that what being a true business partner is all about? 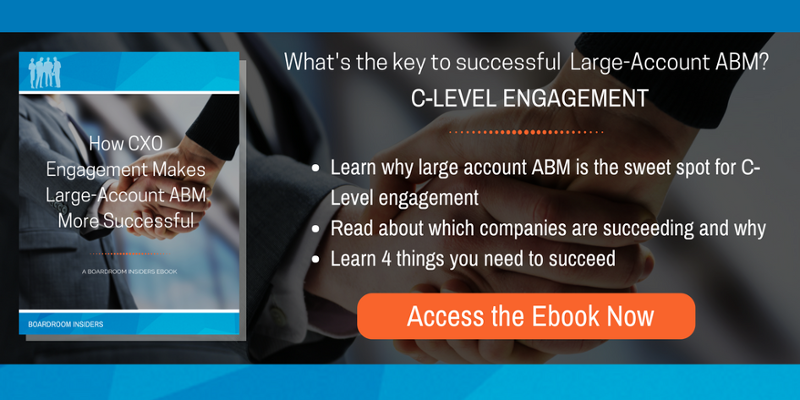